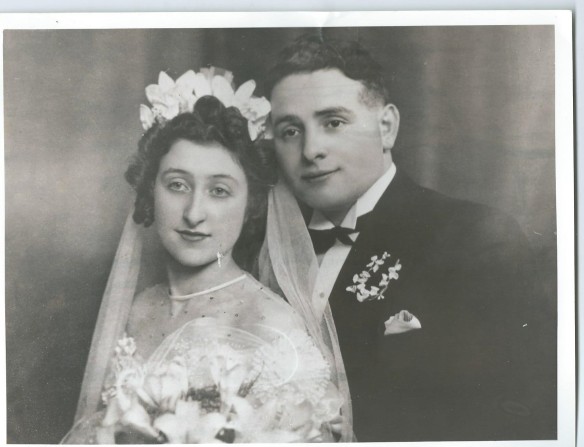 It’s remarkable to me with my four surnames

That, for seventy years, my parents were wed.

They got interviewed by Justin Webb

For the Today programme. Mum said,

‘Jack  gave and I took,’ she quipped.

It’s true, he was the worshipper

From their teens,  and she the worshipped.

She was a homemaker, he a schoolteacher,

Wanting us daughters to make our mark.

For the record, my sister is short, dark-haired

And quite noticeably beautiful;

I am short, fair and inclined towards religion,

Yet, in some ways, possibly less dutiful.

There was also the baby whose premature birth

Occurred two years before I was born

He died, so remains a great mystery,

But some fabric of my parents’ life was torn.

In the army, he had many close shaves;

She, in the East End, took to the shelters

Their parents, born in Europe

Had migrated to this Sceptr’d Isle

And here they flourished,

Working with machine and textile

But thriving in the postwar boom

No longer sleeping  in one room.

My grandparents were tiny

But my mother’s brothers were quite tall

Appeared in them all.

I always think my son is five foot eight

But he says no, five seven or maybe six.

His boys could grow up tall

As their mum brings tall genes to the mix.

When one of my daughters studied theatre

They got her to play Hermia, in the Dream,

Where matters of height and size

Are a part of the play’s theme.

The thing is, she’s taller than her sisters,

Tall enough to have joined the police

When they still had a height requirement,

If such had been her caprice.

To this day, I’m put in mind of my father

Usually on a screen: actors or journalists

Who appear every now and then.

My Zodiac and Chinese star signs

Are associated with the element ‘earth,’

If such categories have any worth.

Obviously, as my feet touch the ground,

I am nearer to the earth than the sky,

But I’d  prefer ‘air’ for my element,

To fix the gaze aloft on something high.