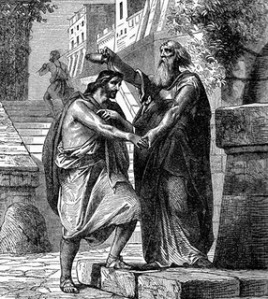 We are told the young man is beautiful
Unrivaled among his peers
We can tell he is dutiful,
Obedient, despite his forty years,
To find his father’s asses is his task,
Unaccountably, they strayed,
This young man whose name means ‘ask’
Always comes to his parents’ aid.
We are told he is unusually tall
Head and shoulders above the rest
So this young man we know as Saul
Appears exceptionally blessed.
His errand is unsuccessful,
He lacks a sense of direction
He gets lost, which he finds stressful,
He is not entirely perfection.
He tells his servant ‘We’ll turn back,
Give up the asses now as lost,’
The lad answers ‘Further up the track,
And for just a little cost,
A man they call the seer will advise.’
But Saul has now run out of cash.
The servant says ‘Come on, the man is wise,
And I always carry a stash.’
Saul at times tends to be passive,
And readily he obeys
The lad, whose chutzpah is massive.
We begin to glimpse Saul’s malaise.
Three or four young women come into sight,
They stop when Saul asks the way,
Determined to assist in his plight –
You don’t see men like Saul every day.
Saul’s party at last reaches the town.
Where Samuel the prophet, meets them;
He notes the man whom he must crown
And, with solemnity, he greets them.
They accept his hospitality
And Samuel speaks to Saul alone,
Explaining the reality,
Saul is destined for the throne.
‘Since you,’ he says ‘have been appointed,
I have ready a cruse of oil
From this moment you are God’s anointed,’
The seer fails to see Saul recoil.
Samuel is nothing if not directive,
He tells Saul what he must do,
And Saul achieves his objective
For the asses are recovered too.