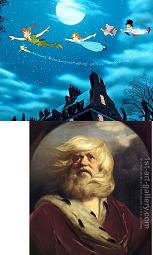 Becoming a parent, he forsook being a son.
As a father, he had a son; could not himself be one;
How truly Barrie showed the children’s flight
Out of the window into Peter Pan’s night,
The Neverland whose meaning is forever
Never, never, never, never, never,
And that is the song of a father, King Lear,
Who is the parent you behold here.

I too had a father; stardust he is now;
Peter Pan sprinkles stardust, the children learn how
To fly out of the home; they give Nana the slip
And dwell in the shadow of Captain Hook’s ship.
Yet he was a father too, Abu Hook,
The mother he yearned for would soon overlook
James her son and send him to Eton
Where pirates are made, hard of heart, weather-beaten.

Now my names are Mother, Granny, also King Lear;
The children took flight but in truth they are near
For which I thank God, my other father.
He too is stardust although somewhat farther.
He enables me, Lear, to make flights of my own:
Ryanair, EasyJet, I am Tinkerbell’s clone.
By hook or by crook we must become both old and young;
Peter Pan ‘will never see so much nor live so long.’